Happy Chinese New Year and Gong Xi Fa Cai to all our beloved reader, thanks for the support in the past few months. Your support greatly motivated us to contribute more, feel free to recommend your fried to our site and "like" our facebook!


Yee Sang also known as YeSheng which consist of raw fish slice, various type of shredded vegetable, peanut and sweet sauce. Yee Sang was started pretty long time ago in Singapore and Malaysia by Chinese community, Chinese consume it during Chinese New Year by mixing it around and toss it high into the air with chopstick while saying out loud your wish for the coming year, which as well symbolism of "good luck" for the new year

Sushi King has Yee Sang promotion on every Chinese New year which cost RM8.88(Small) and RM38.88(Large). We had the RM8.88 small dish and it was pretty big for two people, the ingredient is slightly different from the traditional Yee Sang, in this small plate it does include Crab Meat Stick, Salmon Fish, Scallop and Cucumber, dressing is sweet sauce. It tastes good and it as the 3 consecutive years we ate this.

Kong Xi Fa Cai and wish our reader Healthy Always(We know you eat so much after reading our blog!)! 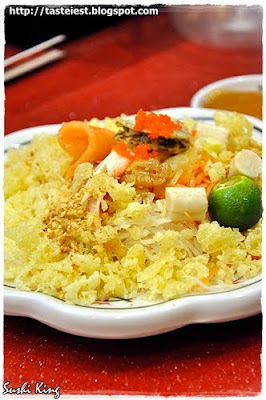 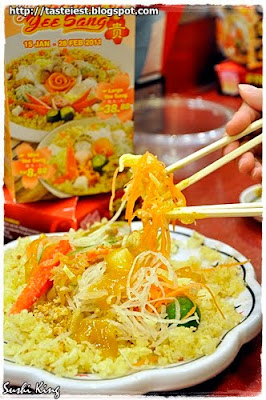 https://youtu.be/5X22L5FFRgg China House famous for their signature cake"S", I mean a lot of cake. No doubt that it is one of the best cake shop in Penang and we had the impression that China House only served cake with drink but we are completely wrong, they do have awesome menu for breakfast, lunch and dinner as well. Although the outlook of the shop look small but inside is actually very long with 3 connected area, right after the entrance is drinks counter with a couple of table and one table fill up with cakes, further down the hall is another seating area with book and some antique, follow through is an outdoor decoration pool and last area is a wine bar. We had Lychee Cucumber Soda RM12.80 and Hot Latte RM12.80. Lychee Cucumber Soda are extremely refreshing especially on hot day, cucumber green and fresh taste mix extremely well with lychee and soda, it taste very good. Ministrone & Chickpea Soup of quinoa, leek, fennel, pumpkin & beans with Chimichurri Pesto a

The Best Steamboat Buffet in Penang

Steamboat Buffet has become part of the Penang famous cuisine and the rising of many steamboat buffet in Penang Island which one you choose? The price starting from RM19.90 toward RM49.90 or even more, it all up to the customer to decide what they want, some has huge range of steamboat ingredients and some are limited. Some shop has fancy decoration but charge premium while the other are reasonably cheap but without air-con. We know it hard to make a decision and that why we are here to help you.   Ding Charcoal BBQ & Steamboat Buffet Steamboat and BBQ with good environment, slightly more expensive but offer quality food. 3A-1-11, Straits Quay, Seri Tanjung, Tanjung Tokong, 10470, Penang. 604- 899 7829 N5 27.495 E100 18.779   -CLOSED-YEA Japanese Barbecue & Shabu Shabu Steamboat and Stone Grilled with good environment, well worth the value as the food provided is high quality and huge range of selection. Ground Floor, Penang Times Square, Jalan Dato Keramat, 10150 Penang, Mal